If you look at the gigantic, circular crater, you know that only one thing – one gigantic thing – could have created it. Yet when mining engineer Daniel Moreau Barringer suggested in 1902 that a meteor impact formed the crater, the scientific community scoffed and dismissed his idea. They had already concluded the crater had a volcanic origin. But Barringer spent 26 years verifying his theory to prove his point.

Since then, new minerals have been discovered at Meteor Crater and astronauts train there. Numerous studies have been done at the site to estimate the rates and energies associated with comets and asteroids that might impact Earth in the future.

It’s quite an impressive sight when you walk out to the rim of the crater. It’s big, but it doesn’t appear to be as large as it really is. At over a mile across and 550 feet deep, they say the floor of the crater can fit 20 football fields and more than two million spectators could observe from its sloping sides. The size really hits you when you look through the observation telescopes to see a 6-foot-tall model astronaut. He’s nearly invisible to the naked eye. 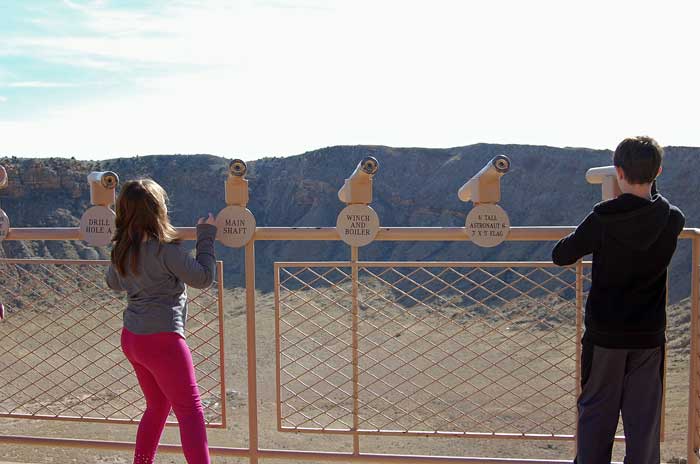 Tours of the Meteor Crater are taken via self-guided walk along a portion of the rim. A longer, guided rim tour is available but, unfortunately, we arrived too late in the day. (Be sure to call ahead to verify tour times.) The visitor center houses artifacts and exhibits, an interactive discovery center that’s excellent for kids, a movie theater, Subway restaurant, and extensive gift shop. 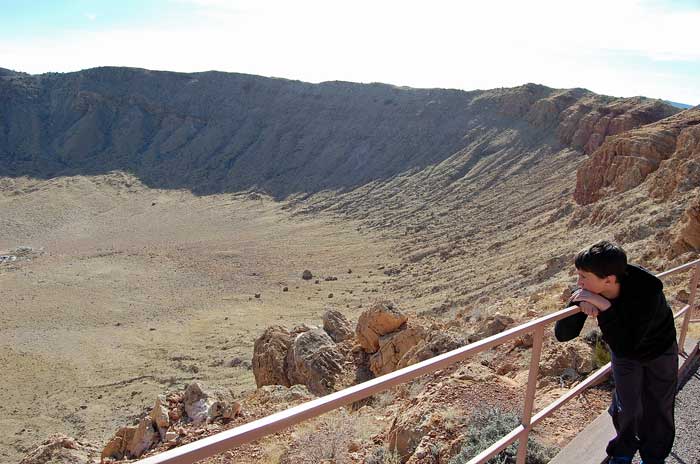 Meteor Crater is just off Interstate 40, about 45 minutes east of Flagstaff and not far from Winslow, where you can get your photo opp “standing on a corner in Winslow, Arizona.”

Where to stay near Meteor Crater

My family enjoyed our stay at the Courtyard by Marriott Flagstaff. The room was spacious, and the location was perfect. We could walk to restaurants, and the historic downtown Flagstaff area was just a 5-minute drive. I also liked the hotel room lighting. Several small lights were set in strategic areas that allowed one person in the room to read or work while allowing the others to sleep. I wish I could say I was the one up late working, but it was really my teenage son playing games online with his friends while the rest of us went to bed!

Where to Eat in Flagstaff

My family enjoyed the Galaxy Diner – a true 50s diner, complete with jukebox and hundreds of milkshake and malt flavor options. Granny’s Closet is another family-friendly restaurant that offers a glimpse into the history of Route 66. Guarding the parking lot is a huge lumberjack – a testament to the “Muffler Men” that were once Route 66 icons.

More things to do in Arizona

The Grand Canyon is less than an hour drive from Flagstaff, but be sure to check out the Lowell Observatory for a close-up look at the universe and Flagstaff Extreme Adventure Course to test your limits on the obstacles and zip-lines! Three National Monuments – Sunset Crater, Walnut Canyon, and Wupatki – are within a half-hour drive and tell the stories of the ancestral Puebloan people who settled near Flagstaff. And if you have more time in the area, here’s an itinerary for a one-week road trip in Arizona!