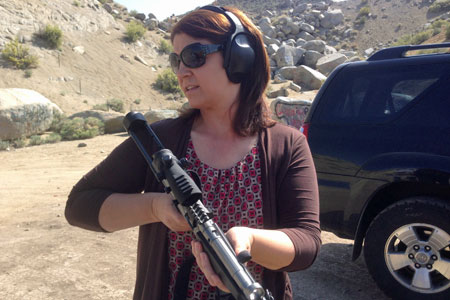 “So how do I hold it?” I asked, flailing the loaded gun as I gestured nervously.

My husband, Paul, wrapped his arms around me and steadied my grip. “You hold it pointing away from you. And you never wave it around.” He guided my shaking hands into the proper position and showed me how to cock and aim.

Target practice at the Personal Defense and Handgun Safety Center (PDHSC) in Raleigh, N.C., was an unlikely celebration for our 19th wedding anniversary. But learning to hold, load, and fire a gun for the first time took me on an emotional roller coaster that proved to be a whole new kind of romantic.

More women are packing heat than ever before. The percentage reporting a household firearm is at a new high – 43% according to a 2011 Gallup poll. Female gun owners spiked to 23% in 2011, compared to 13% six years earlier. While lots of ladies learn how to shoot independently, others are taught by the men in their lives.

When my husband suggested buying a firearm, I agreed wholeheartedly. We live in a rural, wooded area well-stocked with wildlife and vermin of all kinds. I imagined a particularly destructive groundhog with a price on his head. And with a sluggish economy and talk of martial law and zombie apocalypse, I was more interested than ever in having a gun for hunting and self-defense.

Eager to learn, Paul attended an NRA First Steps pistol class and practiced at the local range before considering a purchase. But for me, child care and daily responsibilities delayed my training. Our anniversary – during a quick business trip to North Carolina and with the kids stashed away at Grandma and Grandpa’s – seemed like as good a time as any to visit a shooting range. 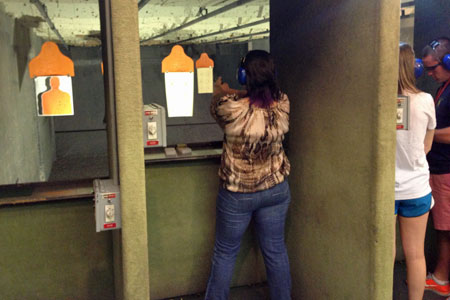 Upon arrival at PDHSC, an employee went over the paperwork and rules with us. Although no one at the Center knew I was a virgin to gun-handling, the anxiety of being a newbie weighed on me. What if I did something wrong and shot my thumb off? Guns are not toys, after all, and this adventure was a far cry from learning a safe sport like, say, frisbee golf.

Donning our ear and eye protection, Paul and I stepped into what I dubbed “the green room” – a small buffer room between the reception area and the shooting lanes. Designed to protect those in the shop from the ear-splitting sound of gunfire, the room’s outer door must be closed before opening the inner door and accessing the range.

The target practice area reminded me of the batting cages where our son would hit balls for Little League. The open, sterile room allowed for spent cartridges to fly safely, while the concrete barriers between shooters ensured protection from unlikely crossfire. We stepped into our lane and I made a mental note of the others nearby. Two young couples, probably in their early 20’s. One older man who looked like a stereotypical hunter.

Crack! I heard a gun fire nearby. Even with ear protection, I startled at the explosive sound. A hint of smoke and the unfamiliar stench of gunpowder wafted around me. Still feeling unsure of myself, I stuck back against the wall while Paul opened the box of bullets.

“You go first,” I stalled. He fired off a round then turned to me expectantly. I joined him in the lane and loaded a gun for the very first time.

Aim, squeeze. Relief and exhilaration flooded my body. I shot a gun and even hit the target!

Paul wiggled his eyebrows and smiled broadly at me. “Nice shot,” he tilted his head in the direction of the paper man I had just injured.

The softer elements of my surroundings began to creep into my consciousness. The recoil was less intense than I had imagined. The shells tinkled as they fell to the floor. Laughter floated from nearby lanes. The anxiety I had felt made the success even more titillating.

Hotter Than Dinner and a Movie

I’m not the only one who felt the vibe.

“You look really hot shooting that gun,” my husband whispered in my ear.

And he looked stronger in my eyes. When he purchased the gun, I understood that he knew how to use it. But seeing him load, aim and fire first-hand, and having him teach me, brought his knowledge to life. He made me feel safe. We shared something intimate in that shooting range as we celebrated nearly two decades of marriage.

And my experience is not unique. NPR says shooting ranges are the new bowling alleys – offering games, specials, coupons, leagues, and romance. Sealed Mindset in New Hope, Minn., offered a date night that was dubbed “the most unusual Date Night concept around” by Inc. Magazine. For $250, you get a healthy meal, a personal defense demonstration, and equipment and range time. Range USA in Memphis offers Date Night, charging $60 for a shooting lane, two boxes of ammo, targets, and dinner for two at their deli. Owner Scott Kilby says, “It’s important to do that candlelight dinner, but people like variety. They don’t always want to do the same thing.” The Gun Store in Las Vegas has added a chapel and offers special firearm-related wedding themes. And check out the Dating Divas fun “gun date” printables to really create a themed date night!

Indeed, many couples view their time at the range as romantic and memorable. Before leaving, the girls in the adjacent lane asked us to take their picture with their fellas. They returned the favor for me and my husband. Since that anniversary date, we’ve spent several “date nights” at target practice and we’ll be enjoying Valentine’s Day at the range, too.

Target practice is no longer a “hunter’s” or a “man’s” sport, but can be a sexy hobby that couples can enjoy together. Shooting is practical, inexpensive, relieves stress, and provides a boost of adrenaline and endorphins. Bored of dinner and a movie on Valentine’s Day? Check out your local shooting range. I can’t think of a better way to spend a romantic day.

3 thoughts on “Love and Guns: Fire Up Valentine’s Day”