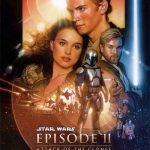 Spoiler warning for everything Star Wars.

I feel pretty fortunate to have lived in the generation when all the Star Wars movies were created. Back in 1977, I saw the first Star Wars in the movie theater with my Dad. Now officially titled Star Wars: Episode IV – A New Hope, it was just “Star Wars” back then. It was groundbreaking, unique, and exciting.

I was 8 years old and my Dad was my movie buddy, taking me to see things like James Bond (Roger Moore era all the way), Rocky, and Star Wars. I can’t say I remember a lot about my reaction to the movie, or any of the original trilogy, other than I thought Han Solo was hot, Vader was scary, and the Ewoks were cute, but stupid.

I have memories of several scenes that left an impression on me. Iconic scenes and lines that most people from my generation (that’s X by the way) can recite and would have been memes, had that been a thing in the 80s. Obi-Wan using the Force on those Stormtroopers – “These aren’t the droids you’re looking for” – and Luke’s child-like amazement. Han Solo being encased in carbonite. Yoda telling Luke, “Do… or do not, there is no try.”

As for the greatest cinematic reveal of its time (all time?), I vividly remember my shock when Vader said, “No, Luke. I am your father.”

Yeah, I had no idea “Vader” meant Father in German. And I had a German grandmother.

Since streaming wasn’t a thing in the 80s and 90s and I was busy going to college, getting married, and having children, I didn’t really revisit Star Wars until the late 90s. Sure, I might have seen it during a rerun on a Saturday afternoon a couple times, but it wasn’t until 1999 that my Star Wars fandom fever really hit.

The prequels were coming! This. Was. HUGE. The announcement that George Lucas would be creating three new movies set before the time of the original Star Wars trilogy was one of the biggest things to happen in entertainment in years. My husband and I re-watched the original movies to get ready.

Episode I – The Phantom Menace was exciting because it was the first Star Wars in 16 years. I remember loving it and being really pissed that Qui-Gon Jinn died. I was immediately taken with the stories of Anakin and Padme. But there were some dumb parts and the story left me hanging. I guess that was the point.

My son was less than a year old when Episode I came out. But in 2002 when Episode II was released, he was nearly 4. And he was already a Star Wars fan. We had watched all the movies with him at home. He had LEGO Star Wars sets and action figures. In fact, my son learned to read from a game called “Star Wars: Epic Duels.” He wanted to play his own cards so badly that it inspired him to learn to read.

Countless hours were spent watching Episodes I and II with my son. We played Star Wars guys every day. Anakin was the hero in our house, even though we knew what he would become.

Padme was my favorite. I loved her strength. I loved that she was young and wise. I loved the idea of the decoys that protected her. I am still moved by her iconic line from Episode III: “So this is how liberty dies. With thunderous applause.”

I know the prequels aren’t cinematic gold. Or even bronze. But I loved them. They were fresh and different. They brought new life to a saga I held near and dear. And they told a tragic love story.

The timing and my season of life also had a lot to do with my love of the prequel trilogy. Experiencing those movies with my young son, watching them on an endless loop, role-playing the characters… that kind of immersion has an effect on a person.

Ten years later, we get another Star Wars movie. Was it necessary? No. Was it original? No. Star Wars: Episode VII – The Force Awakens was created for a new generation, with a healthy dose of fan service to my generation.

The Force Awakens was basically a retelling of A New Hope. Girl on desert planet becomes involved in the Rebellion, somewhat unwillingly. She discovers she has a mysterious power. There are questions about her parentage. She is thrown together with a couple other unlikely heroes and, together with their trusty droid, they blow up the sinister device that threatens the galaxy. Oh, and the bad guy in the black cloak and scary helmet is looming large.

But again, after years without Star Wars, fans were ready. Millennials who grew up on the prequels now had children to take to a new telling of the Star Wars saga. Gen X-ers were hoping this new trilogy wouldn’t ruin everything we loved about Star Wars.

I was in the theater on opening day and I loved it. Watching a Star Wars movie in the theater, it’s hard for me to walk out and say I didn’t like it. Star Wars is like a worn, cozy sweatshirt that always comforts me.

The Force Awakens had an undertone of campiness and humor that brought me back to the original movie. I liked all the new actors. I got to see Chewbacca and Princess Leia again. And it had Han Solo. At 70-something, he’s still hot.

But it wasn’t the same feeling as the prequels. In Episodes I, II and III, we were building up to something we knew was going to happen. Anakin was going to have two children and become Darth Vader and the Jedi were going to be all but extinct. It was going to end in tragedy. And I couldn’t wait to see how it got there.

With the new sequel trilogy, there was only one question: Who is Rey? And that mystery still didn’t hold a candle to wondering how Anakin would become Darth Vader.

The creators and directors of the sequel trilogy were afraid to take risks. As Yoda once said, “Fear is the path to the Dark Side. Fear leads to anger, anger leads to hate, hate leads to suffering.”

I think the sequel trilogy suffered a bit.

The Last Jedi created a lot of plot holes and unnecessary subplots. Critics hated it. Again, I came out of the theater liking it, but after a re-watch, I recognized this movie had problems. Thankfully, The Rise of Skywalker fixed most of them.

The question of Rey’s parentage was answered impressively. In all my theorizing, I never suspected she was a Palpatine. But ultimately, this movie retells Episode VI. Even the Ewoks were there.

I walked out of the theater yesterday feeling unsettled. Part of me just enjoyed watching a really fun, exciting movie with tons of action, great special effects (except for photoshopped Princess Leia…) and a satisfying end to the story. But something nagged at me, preventing me from squealing with excitement about how much I loved it.

After thinking for awhile, I realized that the nostalgic callbacks and parallels that I loved in The Force Awakens now felt stale in The Rise of Skywalker.

Maybe those growing up on the sequel trilogy won’t realize those three movies are totally unoriginal. But for me, and my 40+ years of Star Wars-watching experience, I’m left with disappointment.

I liked the message of The Rise of Skywalker: The Force is all around us. We don’t need Jedi or Sith. There’s good and bad in all of us. We control our destiny and choose who we want to be.

I choose to be a person who unequivocally loves the prequel Star Wars movies.

Thank you, Star Wars, for being an important part of my life. I hope we can take a long break now. And if you do come back, I hope you take some risks. Because any new generation of Star Wars fans deserves to get something to completely call their own.