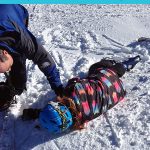 I learned to ski in my early 20s when I started dating my future husband, an avid skier. We spent several years getting on the slopes early, skiing hard, enjoying the apres-scene, and relaxing by a fire or in a hot tub. Young and unencumbered, our ski vacations were exhilarating, relaxing, and romantic.

Then we had kids. Naturally, we wanted them to love skiing the way we do. But getting the kids on board is not all rainbows and unicorns, I can assure you.

Skiing with our kids now, at ages 16 and 10, there are laughs and memorable moments. But there are lots of times when skiing with kids sucks. Here are six reasons why:

1. Getting Kids Out of Bed to Ski Early

My kids don’t get out of bed early. By the time they’re up, fed, dressed for skiing, and out on the mountain, the day can be half over. I’ve tried to remedy this by getting them to bed early, and telling them we have to be out an hour before I’d ideally like to be on the mountain. I’m not often successful.

My kids aren’t very hungry in the morning. So with the stress of getting awake, outfitted, and out the door while there’s still snow on the mountain, I can maybe get half a banana into their bellies, if I’m lucky. And guess who’s starving after one or two runs?

But I’ve learned to turn this to my advantage. I pack granola bars in each kids’ jacket, then pinpoint the food source on the mountain that will appeal to them most and dangle it like the forbidden fruit.

“We can get {insert desired food here} after 3 more runs!” Even better if the food source is on another peak so they really have to work to get there – then work to get back to base.

Walking in ski boots and carrying heavy skis sucks for everyone and it’s my least favorite part of the ski day. But it would be nice if the kids didn’t act like they were carrying the refrigerator on their shoulders. We’ve shown our kids various ways to carry skis – and they do OK – but the whining is ever present.

4. Going to the Bathroom

This is not such a big deal for boys, but can anyone tell me how a young girl in ski boots and ski pants can go to the bathroom without getting pee all over herself? Her legs aren’t that long, so the ski pants don’t pull down that far before they get stuck on the boots. She complains about the pants rubbing against the toilet (eww) and can’t get seated far back enough to do the deed properly. It’s always a disaster.

You rarely get that perfect bluebird day: sunny, low 30s, no wind, and just after a dump of powder. It’s tough to tell exactly what the weather will be like out on the mountain. It could be OK at the base, but a windy, white-out at the top. Kids don’t always adapt well to variable weather conditions. Be sure to pack the kids’ neck gaiters in your pocket, even if it seems warm at the base.

6. Tackling a Slope That’s a Bit of a Challenge

Unless you are very familiar with the mountain you are skiing, it’s likely you’ll try a trail that’s a bit beyond your child’s skill level. This is good in most cases because it challenges them to improve. But DO NOT do this at the end of the day when said child is tired.

We took a chance on a blue trail for our last run of the day with our daughter, instead of taking the crowded, meandering, “family green trail.” She’d skied blues before, so we weren’t concerned. But this particular trail had been skied-off and was not in the sun. The pitch and the slick spots sent my girl into a tizzy that she’ll never let us forget.

Some wonderful gentlemen from Texas saw our frustration and adopted my daughter, helping her part way down. But eventually we just took her skis off and let her slide down the steeper part on her butt. Good times.

Skiing isn’t the easiest of sports to manage with kids, but raising the next generation of winter outdoor enthusiasts is worth the effort!

8 thoughts on “6 Ways Skiing With Kids Sucks (and How to Make it Better!)”