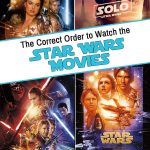 The final installment of the Star Wars saga will premiere in movie theaters December 20, 2019. Here is the correct order to watch the Star Wars movies to prepare for this epic finale, Star Wars IX: The Rise of Skywalker.

I have conflicting feelings about Star Wars Episode 9. It always makes me nervous when a franchise I’ve loved for so long comes to an end. Will they redeem the story after the disappointment of Episode 8? Will the final movie perfectly wrap up a heroic adventure story that has meant so much to millions for more than 40 years?

Can they stick the Star Wars landing?

We’ll find out on December 20th, but now is the perfect time to do a re-watch of every Star Wars movie to refresh your memory or for new fans to embark on a journey to a galaxy far, far away and get immersed in the Star Wars universe.

There are several schools of thought when it comes to the best order to watch the Star Wars movies. It’s a hotly-debated topic and there are pros and cons to any watching sequence.

Some fans suggest watching the movies in the order they were released in theaters. Others believe it’s best to watch them in chronological order according to the Star Wars timeline. I firmly believe that a combination of these options is best. Here’s why:

You probably know that the “original” Star Wars movies by George Lucas are now the middle of the timeline. I watched the very first Star Wars movie in the theater in 1977 with my Dad. I’ve watched the prequels countless times in the early 2000’s as my Star Wars-obsessed son was growing up. I even dressed up as pregnant Padme from Episode 3 to run in the Disney Dark Side Half Marathon.

Some fans suggest watching the prequel trilogy (Episodes 1, 2, and 3) before the original trilogy. Those people would be wrong.

Watching the original trilogy from the late 70s – early 80s gives you the campy, nostalgic feel that is important to start with. It feels wrong to watch the prequel trilogy with its higher production value, and then go back to the original trilogy that is so obviously from the 70s. Most importantly, watching the prequel trilogy first ruins one of the absolute best cinematic reveals of all time.

So this list is my personal opinion of the best order to watch the Star Wars movies to get the most enjoyment from the saga.

A New Hope (IV): This was the first Star Wars movie ever and you should watch it first.

The Empire Strikes Back (V): Arguably the best Star Wars movie of all time.

Return of the Jedi (VI): A solid ending to the original trilogy, even with the Ewoks.

The Phantom Menace (I): There’s a lot of hate out there for this movie and some lists say to skip it entirely. DO NOT SKIP IT. It’s not a great movie, and few fans like Jar Jar Binks, but it’s important back story. And Liam Neeson is awesome as Jedi Master Qui-Gon Jinn.

Attack of the Clones (II): “This is where the fun begins,” says Padawan Anakin to Jedi Master Obi-Wan Kenobi. This is also the love story segment of Star Wars. But there’s plenty of action, too. Yes, it has its cheesy moments, but it sets up so much of Anakin’s character. This is my 3rd favorite Star Wars movie (Ep 4 & 5 are my top two favorites)

The Clone Wars (animated): A brief reference in Episode 4 sparked wonder for years – what were the clone wars? A series of excellent animated shorts explored this time period and inspired this feature-length, animated movie, followed by its companion TV series. The Clone Wars is not essential viewing, but it’s great if you want more Jedi/Anakin/Obi-Wan stories.

Revenge of the Sith (III): This movie brings Anakin’s story to a heartbreaking end and features the rise of one of the best movie villains ever, Darth Vader.

Solo: Han Solo’s back story is a fun addition to the Star Wars universe. But if you’re short on time, you could skip this movie. Sometimes back story is just fine left to your imagination.

Rogue One: Here’s where we learn about the origin of the Death Star technology. The ending of this movie, with its perfect lead-in to Episode 4, is reason enough to watch it. And it’s another reason you need to see the original trilogy first. All the other Star Wars movies lose some humor, nostalgia and emotion if you haven’t seen 4, 5 and 6 first.

The Force Awakens (VII): 30 years after Return of the Jedi, we meet scavenger Rey on a desert planet as she gets caught up in the Resistance and embarks on a journey to find Luke Skywalker.

The Last Jedi (VIII): Yes, she found him. But after watching this movie, I’m still not sure who is the last Jedi…

The Rise of Skywalker (IX) : The final installment of this final trilogy will be released 12/20/19. (Update: This movie is now streaming on Disney+.)

This is the order to watch the movies that were released theatrically. If you want to get deeper and watch all the Star Wars TV series, read on.

Are you also a Marvel movie fan? Here’s my list of the correct order to watch the Marvel movies.

The Force is strong with you. You are dedicated to following the entire Star Wars timeline. In this case, you’re probably a big Star Wars fan and have already seen the original trilogy. If so, it’s ok to watch everything in chronological order.

The following list is a complete timeline of all the canon Star Wars movies and TV shows in order. I’ve also included the new upcoming shows that have been announced on Disney Plus!