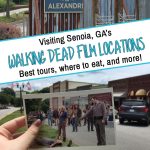 When you really, really love a TV show or movie, there’s nothing quite as exciting as seeing where it’s filmed. And while a lot of shows are filmed in closed studios, fans can experience many Walking Dead filming locations up close and personal in the charming town of Senoia, Georgia.

I’m a huge fan of The Walking Dead and have visited Senoia (pronounced seh-NOY – get it right so you don’t sound like a noob!) five times. The tiny town has embraced its TV fame and offers fans lots of opportunities to geek out.

Here are some key points you need to know about finding Walking Dead filming locations, taking Walking Dead tours, and maybe even spotting celebrities! You can also see my full video tour on YouTube!

Are the filming locations hard to find?

When you drive into the town of Senoia, you are literally in Woodbury (Season 3). Drive around the corner and across the railroad tracks (the tracks to Terminus, Seasons 4-5) and you’ll run right into Alexandria (Seasons 5-10).

While the scenery is very recognizable, you’ll want to take a tour to learn all the details you can’t discover on your own. The tour guides are full of exciting stories and insider information – and some have even played Walkers and extras on the show! See below for my tour recommendations.

How much time do you need to visit Walking Dead filming locations?

I recommend at least a full day in Senoia to take a tour and visit the shops, restaurants and museum. If you’re a super fan, stay two or three days, take two (or more!) tours, and hang out at Senoia Coffee and Cafe (aka the Woodbury Coffee House) where you might catch a celebrity stopping in for their latte!

Where should you eat?

Nic ‘n Norman’s serves classic American food that leans toward the gourmet side. You’ll find salads, burgers, flatbreads, steaks, chicken, and fish. Some of our favorite items are the Philly Cheesesteak Fries, Fried Mozzarella, Garlic Pesto Flatbread, and the Coca-Cola Braised Pork Shank. They have some excellent cocktails, too.

For breakfast or lunch, I recommend Senoia Coffee and Cafe. They have amazing coffees, like the “Dirty Daryl” – a shot of espresso mixed into a chai tea latte. My favorite breakfast is “Hershel’s Hash,” a bowl of hash browns, eggs, corned beef, and a little cheddar cheese.

Where can you stay?

Atlanta is only 45 minutes from Senoia, so it’s an easy drive if you are already in Atlanta for other reasons. But you can also stay right in Senoia at the lovely Veranda Historic Bed & Breakfast Inn. There are also a number of chain hotels in nearby Peachtree City.

There’s also the option to stay in Morgan’s apartment from the “Clear” episode. It’s in the town of Grantville, GA and available for rent on Airbnb. A couple rooms were used in filming the episode and still look the same.

The other side is a large living area with five bedrooms, a full kitchen and bathroom. We stayed there and found it to be a bit grungy with old, run-down furniture and bedding.

It’s also in a very rural and deserted area about 30 minutes from Senoia. But if you’re looking for a unique experience, it’s kinda cool. If you just want to see the filming location, Morgan’s apartment is a stop on Atlanta Movie Tours Big Zombie 2 Tour.

The tour is about two hours long and you stroll slowly around the town, covering about two miles. I loved how the guides had their own stories of celebrity encounters. Senoia Rosita (Mara) was even an extra in several episodes in Season 8, so she’s got stories to tell!

Here are some of the spots you’ll see on your tour:

The Georgia Tour Company has been offering tours since 2014 and estimates upwards of 15,000 people take their tour each year. Fans come from all over the world – it is commonplace for each guide to have an overseas guest at least once a week.

In addition to their walking tours, they have a tour called “Survive the Ride” that’s offered two Saturdays per month. This interactive tour uses a professional fight cast and trained cosplayers.

Guests get “kidnapped” by the bad guys, rescued by the good guys, and visit some amazing, exclusive locations. Included in the cost of the tour is a stop for lunch in Woodbury, as well as a souvenir green screen photo with cosplayers – which is always SUPER FUN.

You start and end your tour at the Georgia Mercantile Company – a delightful store full of local gifts, foods, and souvenirs. And the building was used for filming an “Oceanside” scene in Season 7!

After getting up close and personal with The Walking Dead filming locations in Senoia, you can branch out and see some other locations with Atlanta Movie Tours. They offer three different Walking Dead bus tour options and a walking tour with their Big Zombie tours.

The Big Zombie Tour 1 starts in downtown Atlanta, but Tours 2 and 3 start in Senoia. You have the option of taking the bus from Atlanta, or meeting at a designated spot in Senoia. Each tour is three hours with a guide who was actually a character on the set of The Walking Dead.

Our tour guide was a Walker and told us lots of interesting stories about the necessary makeup and prosthetics needed to make the transformation. Sounds like it might not be that fun, especially in the Georgia summer heat. But I think I’d still go for it if I ever had the opportunity!

We started our tour with a short drive around the city of Senoia. While we hit many of the same highlights as the Georgia Tour Company’s walking tour, it was a different experience because we were on a bus and not on foot. We didn’t get into as much detail or get off the bus to take photos. This is why you could take both tours and really not feel like you’re repeating information.

I liked that they showed scenes from The Walking Dead on monitors on the bus. This helped refresh my memory and gave each stop more impact.

Next we rode out of Senoia to several other filming locations. We were given exclusive entry to the Woodbury Arena where the Governor staged fights for entertainment in Season 3. This is where Daryl & Merle were forced to fight each other. The arena is also where some scenes from The Hunger Games were filmed.

The site where the group camped at the end of Season 2 and Rick made his “this is not a democracy” speech.

The Carriage Bar where Hershel fell off the wagon after his barn full of walkers were gunned down by Shane. Around the corner from here is Steve’s Pharmacy where Glenn & Maggie first did the deed.

As mentioned above, there is also a stop inside Morgan’s apartment from the “CLEAR” episode.

And then there’s this iconic wall, shown in the opening credits.

You may have also heard about the Walking Dead Studio Tour. This tour ran from December 2018 through May 2019, but now appears to be closed. They were supposed to open up again when filming completed for the season, but their web site is down and my emails to them have gone unanswered.

But if it does open again, I’ve heard it’s worth your time and money. You get access to the garbage heaps, the Sanctuary, Hilltop, Oceanside, and even exclusive access behind the wall in Alexandria! Some of my friends took the tour and enjoyed it, but told me that they were very limited in what they could photograph.

There are also smaller tours, such as the Grantville Dead Walking Tour (site of Morgan’s CLEAR apartment), and Walkin’ Dead Haralson Tours (site of the mill where Merle dies).

For any serious fan of The Walking Dead, taking a pilgrimage to Senoia, GA is a must. These Walking Dead tours and filming locations are so much fun and you’ll leave an even bigger fan than you already are!

30 thoughts on “The Walking Dead Comes to Life in Senoia, GA”