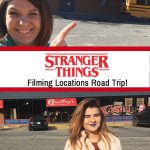 People often ask, “Is Hawkins, Indiana a real place?” Since it’s not, the next question is, “Where is Stranger Things filmed?” The answer is Georgia – mostly in the Atlanta area. And I’ve got all the details to help you take a road trip to see many of the Stranger Things filming locations in real life!

My daughter did a lot of the research for this trip – digging up addresses and having photos on hand so we could recognize the locations. It took a lot of planning and time with Google maps, and now you can benefit from our efforts. Just jump in your car, and follow along!

One question I get asked a lot is whether or not these locations are safe and open to the public. For the most part, yes. But most of these filming locations are rural, so bring a buddy and don’t go alone. Park in a safe place when taking your photos. Don’t go on someone’s private property. Always be respectful.

If you search on your own, you’ll find a lot of web sites with addresses for Stranger Things filming locations. Some of them will be inaccessible and a waste of your time.

I’ve actually traveled to all the locations in this itinerary. This is the best route to take and I’m also suggesting where you might NOT want to go on your road trip! Be sure to also check out my post on where to stay in Atlanta to tour filming locations.

Ready to See Where Stranger Things is Filmed?

We did our trip over two days because we added in some Walking Dead filming locations and visited “Mystic Falls” where The Vampire Diaries is filmed. But if you get started early, you can definitely fit this all into one day. For convenience, I’ve split the trip into north Atlanta and south Atlanta sections.

Note: This itinerary is current as of April 2021. It’s possible that any property mentioned could get painted, sold, or closed to the public at any time.

Arcade: 6501 Church Street, Douglasville, GA
The arcade where the boys play Dig-Dug and Billy drops off “Mad Max” in Season 2. This stop is really fun because the building is still painted to look like the arcade. Attached to the arcade is the filming location for the “Family Video” store which is featured at the end of season 3 and I’ve heard will be seen more in season 4.

Hawkins Police Station: 8485 Courthouse Square West, Douglasville, GA
Half a mile down the road from the arcade location is the Hawkins Police Station. When I visited in 2018, I could clearly see the circular outline where the “City of Hawkins” Police Department seal was on this building. As of April 2021, the building had been renovated and looks a bit different now.

Hawkins National Laboratory: 1256 Briarcliff Road, Atlanta
This is Hawkins Lab where Eleven was kept prisoner and where the demo-dogs attacked poor Bob. In real life this is a research facility at Emory University’s Briarcliff Campus.

When we visited in early January it was completely deserted, but when we went in August there was filming going on! But still we had no problem getting up close to the building and we even went inside, but didn’t see anything happening.

Starcourt Mall: Gwinnett Place Mall, 2100 Pleasant Hill Rd., Duluth, GA
This location is featured prominently in Season 3 of Stranger Things! The mall is open to the public, though many stores are empty. When we visited, an entire section of the mall was blocked off with tall black cloth walls, but we could see several of the 80’s-era store fronts!

Van flip: 3782 Sarahs Lane, Tucker, GA
This is the street where Eleven caused the van to flip over the boys on their bikes. The flip happened between house #3782 and #3788.

We got extremely lucky when we visited this street because a homeowner was outside grilling dinner in his driveway and he came to talk to us. He had actual footage on his phone of the van flip being filmed from his front yard – including a failed version that he showed us!

There is $15 entrance fee at the booth, then turn right and head to the Confederate Hall Parking Lot.

You’ll see a bathroom behind the parking lot and the train tracks are right behind that. There’s no way to tell exactly where they filmed the scenes with Dustin & Steve or the boys walking on the tracks, but several scenes were filmed there as well as in the woods nearby.

And when you’re done taking fun photos, Stone Mountain Park is an awesome place to enjoy for the rest of the day! This was a filming location for Ozark, Raising Dion, MacGuyver, and more. There is almost always some type of filming going on, so keep your eye out for those yellow production code signs.

A few 80s-looking homes in East Point, GA served as the neighborhood where the Stranger Things kids lived. You can take photos from the street, but please be respectful and do not go on their property! Note that Piney Wood LANE and Piney Wood DRIVE are two different streets, but are right next to each other.

Hawkins Public Library (interior), 2777 McGee Way, East Point, GA
This is a real library and Hopper filmed a scene inside, but it was closed for renovations when we visited.

Hideaway Restaurant: 112 N. Berry St. Stockbridge, GA
This is where Hopper confronts Trooper O’Bannon about finding Will’s body in the lake. In real life it’s a pool hall called “Smokin’ Cues.” It looks kinda sketchy and I didn’t feel comfortable going in with my daughter.

Hawkins School: 109 South Lee Street, Stockbridge, GA
This is another awesome stop because it still says “Hawkins Middle School” on the building. It’s an actual (unused) school and you can walk all around and peek in the windows.

Any web search for “where is Stranger Things filmed” will result in the small town of Jackson, GA. This town served as the setting for downtown Hawkins. There are several filming locations you can visit and get great photos!

Hawkins Public Library (exterior): Butts County Probate Court, Jackson
The court building is literally the center of town – you can’t miss it. The entrance on 2nd Street is where you’ll recognize the steps Hopper ran up to go into the library. You also see this building several times in Season 3 – it’s directly across the street from Melvald’s General Store.

Melvald’s General Store: 4 2nd Street, Jackson
The site of the store where Joyce worked. The store is closed and mostly empty, but you can look in the windows. You’ll see the cash register and checkout counter where Joyce bought her telephones and Christmas lights, as well as where she and Hopper talked in Season 3.

The Alley: between West 2nd Street and West 3rd Street, Jackson
It’s just an alley, but it’s where they filmed Steve and Jonathan’s fight.

Before you leave Jackson, stop in to Lucy Lu’s Coffee Cafe and get one of their Stranger Things-inspired drinks! The Upside Down was my choice!

These locations are a bit more out of the way, and not on the path of the itinerary above. But if you are visiting filming locations from The Walking Dead or The Vampire Diaries, you may want to check out these two:

Bradley’s Big Buy: 504 Center Street, Palmetto, GA
This Piggly Wiggly Express is where Eleven stole all the Eggo’s. We bought ours. And in Season 3, this is where the kids go to help Eleven with her injured leg. It’s not far out of your way if you’re going to Senoia, GA to see Walking Dead filming locations.

Oscar’s Gas & Go: 7705 Covington Hwy, Lithonia, GA
This is the convenience store where Kali, Eleven, and the gang steal supplies in season two. It’s called Ravi’s Food Mart and looks really run down and sketchy. We did a drive-by and took a quick photo. Lithonia is near Covington, aka Mystic Falls if you’re a Vampire Diaries fan.

25 thoughts on “Where is Stranger Things Filmed? Take This Road Trip!”